Using Buffers To Stay on Track

Earlier this week I posted an overview of buffers and triggers and shared some common examples of each. Like I said then, understanding my buffers and triggers and working with them is most of the most important differences between my lifestyle change which allowed me to lose over 100 lbs and all my past failed attempts.  Here’s a quick recap of what I explained the other day:

Think of a buffer as something that takes the edge off. You know, when everyone around you is enjoying birthday cake and you pop a piece of gum to give you a sweet fix and distract you enough to keep you from grabbing a fist full of cake. They are often a small, dietary concession, which provides mental relief and allows you to stay on track. Buffers don’t have to be food or drink but for me, they often are. I wrote the other day about sweet tooth strategies and some of those are certainly buffers for me!  Some common buffers include:

The hardest part between buffers and triggers is differentiating between the two and realizing that a buffer can easily become a trigger over time. There’s a fine line between what keeps you on track and what pushes you over the edge. It’s a slippery slope and requires attention and adjusting.

At one point in time, protein bars were a buffer for me. They are sweet, dense and super convenient and I found a few that I thought tasted incredible. I’d keep a couple in my purse at all times and I’d often turn to them mid-afternoon when I was bored and hungry for dinner. At some point though, I started slipping. The sweetness of the bar began to ignite my sweet tooth and I found myself eating two (sometimes 3!) bars and barely even noticing it! My sweet cravings would be out of control for hours or days. My buffer became a trigger. Bars became a tipping point that dragged me off course and made me lose focus. What did I do? Cut out bars. They weren’t a “just in case” go-to buffer. They were Pandora’s box.

I’ve also tried buffers hoping they’d be a buffer but kinda knowing they were a trigger. Enter nut butters. Oh man. Is there anyone who can stop at one tablespoon?? Show yourself! Haha. You have to be honest with yourself. Don’t tell yourself something will take the edge off because you want license to eat it when you know full well you have a hard time turning it off. Like I said, there is a fine line between a buffer and trigger and you MUST be honest with yourself.

So what do I use as a buffer these days? I have a few. Right now, if I am craving something sweet I make a little protein pudding. I usually take 2 scoops of protein and add ½ tsp of caramel extract and just enough unsweetened almond milk to make a thick pudding. I eat it really, really slowly and the sweet creaminess feels so indulgent.

Othertimes, I’ll use nuts and dried fruit. Here’s the catch for me though: I only buy what I will allow myself to eat. I don’t buy a big bag of trail mix. I don’t have enough self-control. I’ll go to Whole Foods or Fresh Market or somewhere I can self-serve select nuts and dried fruits and I’ll put together a tiny amount of each. I make sure that wherever I eat it I’m able to focus and savor each bite.

Arctic Zero protein ice cream. Need I say more? The great thing about this (aside from the taste!) is that you can eat the entire pint. It’s 150 calories, moderate carbs and decent protein. I don’t have to worry about cutting myself off or going overboard. I buy one pint, let it soften a little and take my time to enjoy every spoonful. 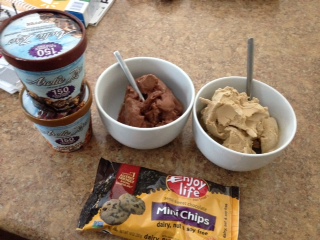 There are a few keys to getting the most out of your buffer foods and leveraging them to help you stay on track:

Buffers and triggers are powerful tools when used properly but they do require attention and awareness. Take some time this week to think about what your buffers and triggers might be and start to strategically use them when you need them!