Why You Need A Salt Rock Lamp

You need a salt rock lamp. Have you heard of them before? They are dim lights surrounded by a block or globe of real himalayan salt.

I used to have one, but I don’t know what happened to it. I bought it for the soft light, but at the time I didn’t realize it had a bunch of other major benefits. I thought they were pretty, I knew the softer light was better for my eyes & my hormones, but I didn’t know anything else about them.

Until recently when what I learned prompted me to buy two for my new tiny house. (Yup, that’s right, I’m now living in a custom-built tiny house – HGTV style!! You can see pics of it by following my stories on Instagram.)

If you’d rather listen to this blog than read it, please click here.

Until recently, I thought they were just a home-decor trend. Earthy. Natural. Granola. Kinda pretty. The lava lamp of 2018. 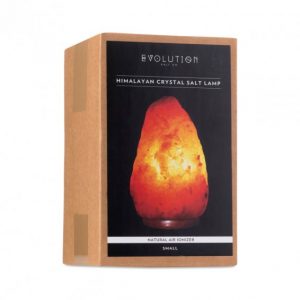 But I was wrong. There are legit benefits to these lamps and the benefits come from the salt itself.

The salt actually attracts and absorbs chemicals, bacteria, dust, pollen, pet dander and even mold in the air.Salt is hygroscopic which simply means that it attracts water, kind of like a sponge. That’s why salt often clumps in the salt shaker. It draws moisture out of the air.  (In Greek, ‘hygros’ means moisture, in case you’re trying to break down that word hygroscopic like I was! #prouddork)As the salt absorbs moisture, it collects what that moisture carries – odors, bacteria, allergens and more. These true himalayan salt lamps are natural air purifiers! Many plants act in similar ways but plants have to be cared for. I don’t like caring for things. Salt lamps are easier. You can’t kill them.

Beyond that, salt emits negative ions that can increase serotonin (boosting your mood) and neutralizing the impact of positive ions which are emitted from all your electronic devices!

We have an ever-increasing number of electronics around us – televisions, cell phones, computers, tablets, game consoles, microwaves, smart devices – all of these things emit positive ions.

There’s a growing body of research suggesting that over-exposure to positive ions may negatively impact both your mood & your health and exposure to negative ions can improve mood, energy & focus.

People spend a lot of money buying negative ionizers to help balance out all this positive ion exposure from electronics and these salt lamps do that for you while also purifying your air!

Plus, they are super affordable.

Not knowing any better, I almost picked up a couple of them from Home Goods for $35 each but I’m so glad I didn’t. First, they weren’t branded. They didn’t disclose where the salt came from, which is really important because you want to make sure you’re getting the real thing and not a fake.

Second, you can get them much more affordably, from a leading himalyan salt mining company, from Thrive Market. I scored them on Thrive Market for $13.49 each!!!! The exact same light is on Amazon for $29.00. Hello!!! Guys, buy one. Buy two. For $13.49, you can be kinder to your eyes, your hormones and clean your air. (Thrive Market can afford these discount prices for two reasons: customers pay a small membership fee and they work directly with manufacturers and cut out the middle men).The one I bought is the Evolution Salt Co. Natural Crystal Salt Lamp.

These lamps are legit! And so affordable! In general, you DO have to be wary of phony products – like those that don’t disclose the origin of the salt. (That’s why I didn’t buy the one from Home Goods – it had no box or label so I didn’t know the origin of the salt.) The brand I got from Thrive Market comes from Evolution Salt Company, which is the world’s largest provider of Himalayan crystal salt. Just keep in mind – the lights aren’t bright so don’t expect it to be a bright light for a dark room. They’re pretty dim but great for reading and even better for all their other benefits! I hope you get a couple, keep them on as much as you can, and tag me (@elizabethbenton) in your pics with your new lamp!

In October 2019, our relationship with Thrive Market changed. They decided to put their marketing dollars in avenues outside of podcasting but we still think they’re a good choice if you’re looking to save money on health & personal care products.