I was completely in “the zone” today. It was around noon time when I realized, “Holy sh*t, I feel unstoppable today!”

It was one of those days where you’re full of energy, getting things done, crushing the to-do list, making great choices and feeling like everything is possible.

When I noticed how well the day was going, I paused & grabbed my journal.

See, when something is working, when something feels right, I don’t just want to notice & appreciate it (though that’s awesome), I want to figure out how to re-create it.

It’s such a waste to think “today was a great day!” without considering what made it so & how you can re-create it!

Learn from those days or moments!

In my journal I made note of what I had done so far & how things differed from my normal routine. That’s how I begin to figure out how to create more days & moments like the ones that felt so good today.

Here’s what I noted about what was different:

I set my alarm. You guys know I used to religiously wake up no later than 4:30am every day. I’ve done that for years. However recently, I’ve been consciously trying to get more sleep so some days I decide not to set the alarm which means waking up between 5-6:30.

Today, I set the alarm for 5 and got right up. No snooze.

I went to the gym early. Most days I workout between 12-1:30p. Today, after getting through my morning routine and some emails, I got to the gym around 6:50am.

I worked from Starbucks. There were some projects I really wanted to dive into & I’ve been having a hard time making progress so I decided to remove “normal” distractions and change things up.

I had a singular focus. I’ll be the first to admit that I often jump around from project to project. I’ll start to write a blog & pause to respond to an email, run an errand, switch the laundry or start a different project all together. Today, I had one thing I was focusing on and nothing else on the list until that was finished.

I reached out to a few people I care about. Before launching into my work at Starbucks, I sent encouraging messages to a few important people in my life.

The point here isn’t so much about what I did differently, but rather the process of noticing when something feels like it’s working, figuring out what is different, duplicating the routine and creating more of that “working thing”.

I’ll play around with some of these elements and see which ones move me towards having more days where I feel like everything is clicking.

I’m sure this morning’s workout helped. I LOVED it.

Let me break this down for some who aren’t familiar with the lingo (you can always google the name of a movement if you’re curious about what it is, but that isn’t the point of these posts. I’m not a personal trainer and I don’t play one on the internet).

This working was 3 3-minute AMRAPs with 3 minutes of rest in between. AMRAP 3 means as many rounds as possible in 3 minutes.

Since the workout is short, you’re going all in – full effort, no pacing.

12 calories on the airdyne bike & 12 power snatch, as many times as possible in 3 minutes. Then you rest for 3 minutes. In the next round the bike stays the same but your weight goes up & reps go down with the snatch. Same thing with the 3rd round.

I was proud of my effort – it had me collapsed on the ground after the 3rd AMRAP!

On the food front:

Before the workout it was cold brew coffee and water. After the workout I had a large coffee with a little bit of heavy cream at Starbucks. I usually drink my coffee black but since I hadn’t yet eaten, I added a splash of cream to hold me over.

Around 1pm I had a huge salad – I took one of the Paleo Power Meals cobb salads and added about 3 cups of raw, shredded cabbage. 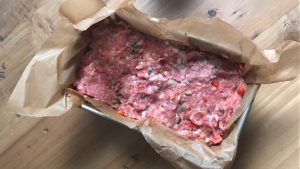 Gotta say, it was freakin’ awesome and I’m psyched for leftovers tomorrow! Don’t you tell me that eating fat loss friendly foods isn’t tasty! I beg to differ – it’s whatever you decide it will be!

PS: If you’re new to these posts, listen to this podcast episode to get the scoop on what changes I’m making in my life and you can start back at my first daily post here.